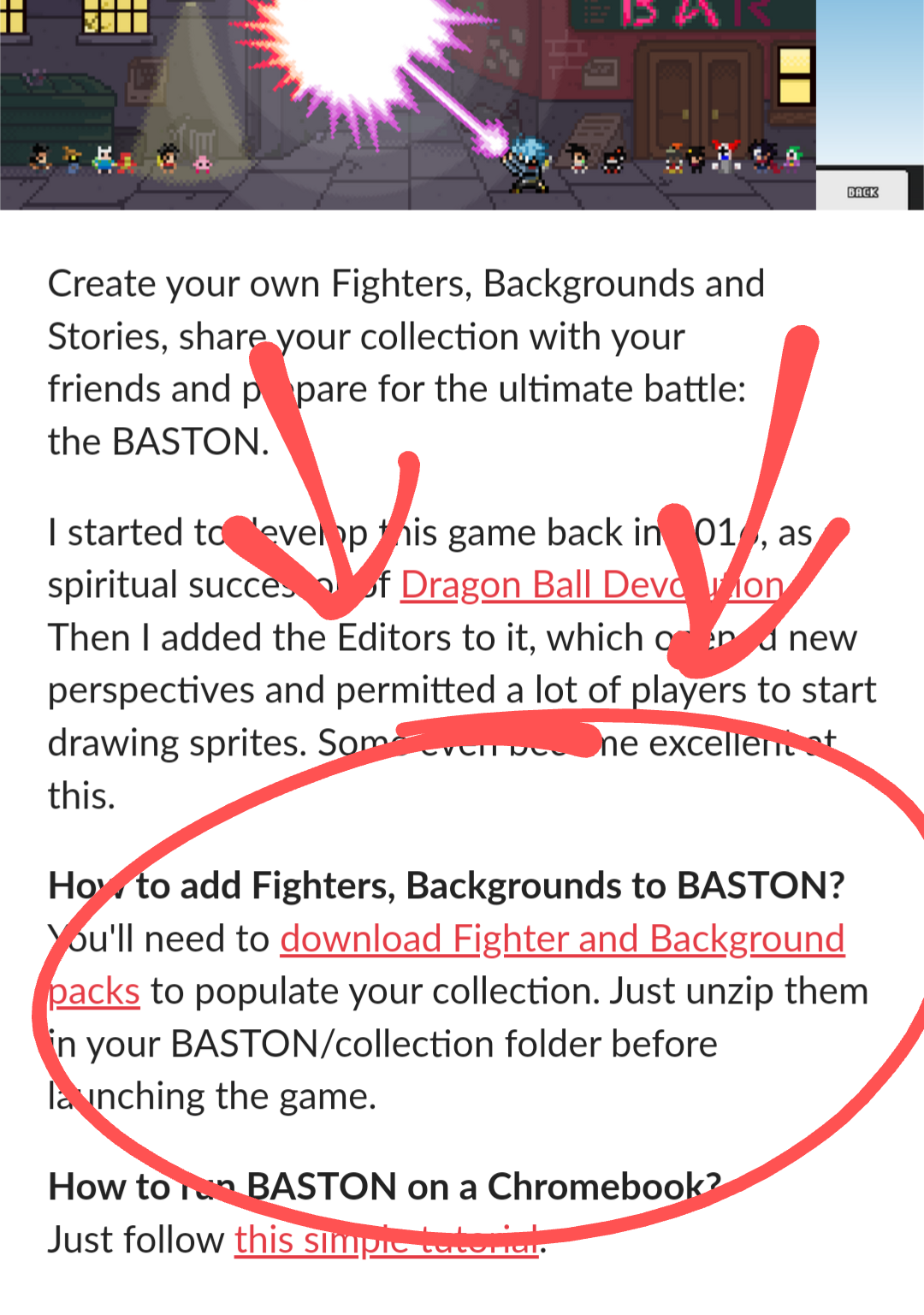 You must have a broken file in your collection folder. Or your save file is corrupted. Try to go to Setup screen and press the delete save file button. Then try Versus mode.

It's written in the text just above... I don't know what to tell you.

Can You ported to Android?

No. Maybe one day. I need to find the time to work on that game. Which means reprogram the core of the game: the fighting part.

Ok i'll wait some day Thank you for the respond

I've just downloaded this game but there's no sound, how do I fix this? (I am playing in Windows 10, if that helps)

Mmm... That's the first. There is no music in the game, but you should definitely hear sounds. Please launch the game from cmd to see if you get an error message.

It seems that it only happened during the first launch, now the sounds are working. Thanks anyways!

What is your operating system?

I'll need further information in order to help you. Do you have an error message? Can your run the game from cmd and see if something is wrong?

I can run but there are no errors or anything it just dont work.

also if other people made other fighters or backgrounds and posted them somewhere where they can be downloaded which is safe, I'd like to know where that is because I kinda want to add more fighters and backgrounds

Hi. The glow bug is already listed, thanks. And you'll find all you need in my forum:

im lost, how do i even open it? im on a windows computer/tablet

So I got everything working and I even played it with some of my friends but none of us know how to transform. If you would not mind can you tell me how but agreat game.

Hold charge button plus up to level up. Or charge button plus down to untransform. Some fighters transform automatically depending on the situation: amount of health, or ki, or a certain time...
Try the Fighter Editor in order to understand how it works :)

it works but i dont have any fighter besides goku

Yep. Exactly as explained on this very page.

what do i do here sorry this my first time working with a game like this. 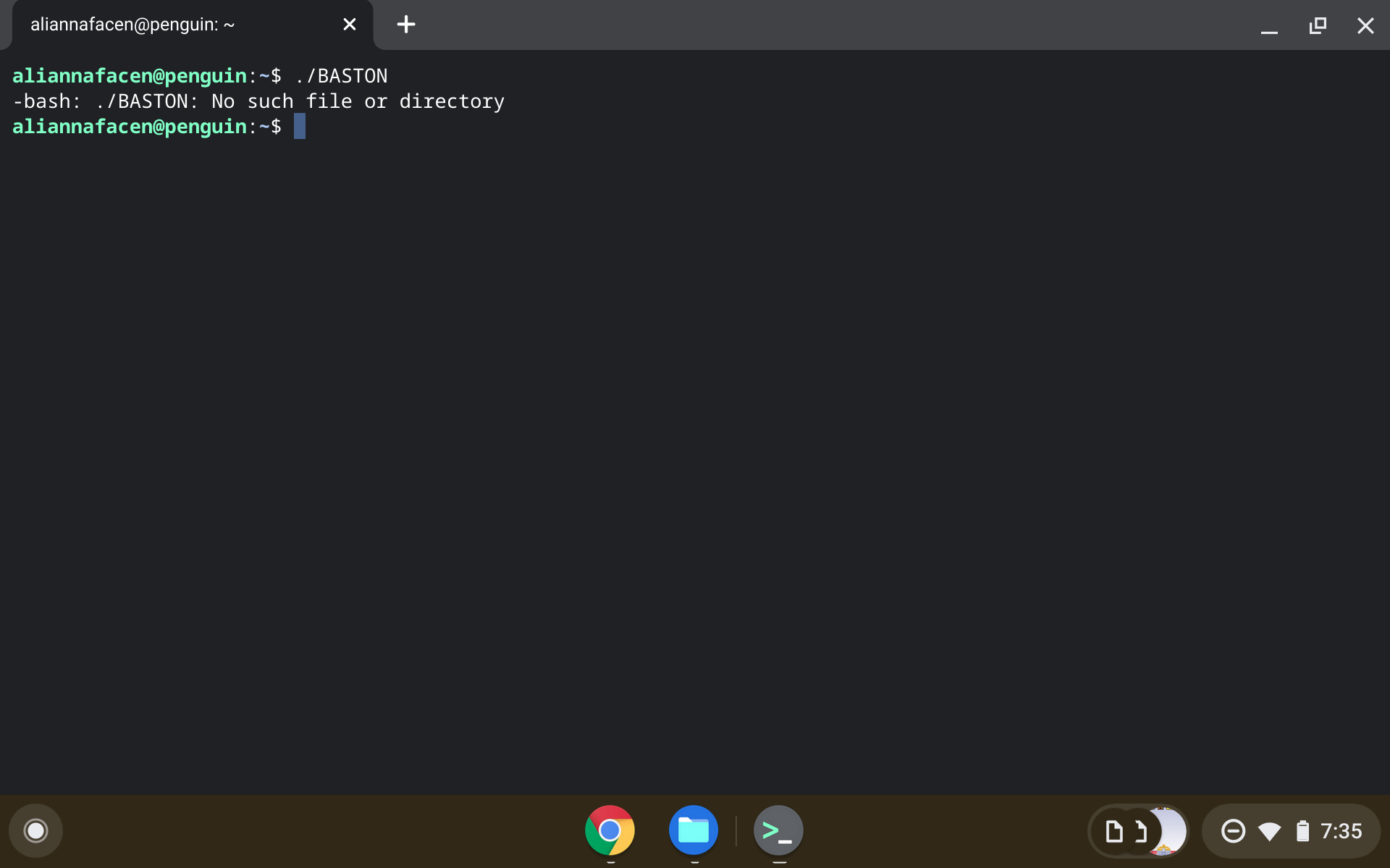 You need to move to the correct directory where BASTON is.
https://linuxize.com/post/linux-cd-command/

When I right-click on the file and open the terminal, it says this and I don't know what to do:

Aren't you trying to run BASTON 64bits on 32bits system? (Or the opposite). Please verify you have downloaded the correct version of the game for your system.

I downloaded the 64- bit version and I send you a screenshot that shows you that my Chromebook is 64-bit. If it isn't the wrong download for the wrong system then what is it?

I don't know then. Did you try searching for "libc.so.6 version glibc_2.29 not found"? That's the basics when it comes to linux errors. From what I read, you don't have the correct version of glibc.

What is your system version? Did you upgrade/update it recently?

I look forward to that great update. Good game

simple, accessible and fun fighter editor! Can't wait for the next big update :)

I can't wait for the next big update either because this is a really great game :)

this is awesome the possibilitys are endless!

Hahaha. I wish they were 😅